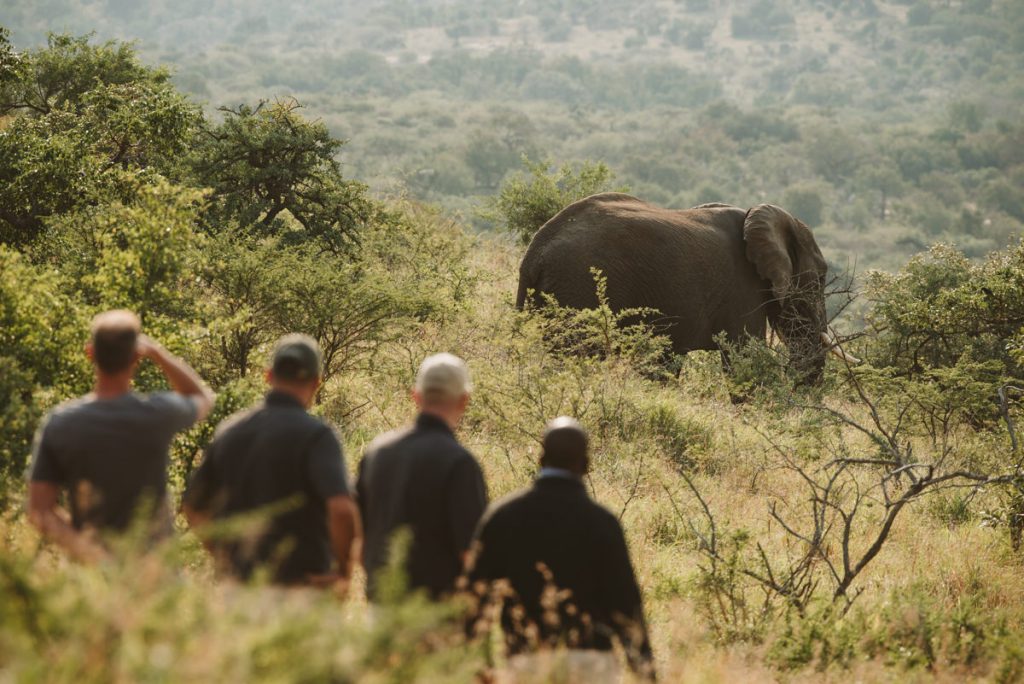 “We’ve just missed her” conceded our guide after reaching the crest of the low hill overlooking the White Umfolozi. We had been tracking the spoor of a female leopard after finding fresh tracks in the river bed. The vervet monkeys on the opposite bank were starting to settle after voicing their anxiety over the potential threat near to our party.

This was during our first game drive in the new mFulaWozi Wilderness private game reserve, 8000 hectares of prime bushveld bordering the southern part of the Hluhluwe-Umfolozi park and we were being treated to a masterclass in tracking by head guide, Phillip Wessels. We were fascinated by the secrets being revealed from mere marks in the sand, adding a unique, new dimension to our bush experience. On returning to the game vehicle Phillip stopped to show us the delicate wrinkled imprint of an elephant’s trunk where it had paused before reaching the top of the incline.

Back at the vehicle we were treated to G and T’s and snacks in the fading afternoon sunlight. The lush riparian foliage dominated by towering sycamore figs provided a magical setting and the familiar, staccato call of a Purple Crested Turaco completed the scene.

We knew very little about this reserve and pressed Phillip for more details: the brainchild of Barry and Sonia Theunissen, mFulaWozi was created by a collaboration with the Mthembu people of the area, direct descendants of King Shaka. The lodge, appropriately named Mthembu camp is staffed by locals who are willing to share the wonders of this remarkable corner of the Zulu kingdom. The reserve is open to the 33 000 hectare ‘wilderness’ area of Umfolozi, a wild paradise unchanged by human hand since its proclamation in 1895. The future plans for mFulaWozi include two new camps and an amalgamation of a further 8000 hectares to make a total of 16 000 hectares of habitat for game to flourish.

Phillip has been in the industry for 22 years and has an impressive list of qualifications, having trained to the highest level in the field. The wildlife tourism sector was not spared during the lockdown period and tough decisions were needed to be made when an uncertain future was on the cards at Phil’s previous work location in Mpumalanga. The precarious situation has benefited mFulaWozi however, as it appears the best on offer have been cherry picked from other locations for the new venture. In Marco and Mauritz, Phil has completed a strong team and for the sake of the future of mFulaWozi I hope they stay the long course. An extremely likeable crew of guys, their jovial good nature can sometimes belie the deep passion they have for their vocation. The responsibility of doing things right from the outset is not lost on the crew and they regard it an honour and privilege to be involved in establishing the park from the very beginning.

Having a personal guide sharing their vast knowledge is such a special opportunity, their ‘bush intuition’ often yielding sightings that would not have been noticed. On the drive back to camp in the dark, Phil stopped to show us a genet hunting in the undergrowth, repeatedly pouncing into the grass to flush out prey. We also stopped to watch a pair of Bronzewinged Coursers; apparently their flight feathers have purple tips that shine in UV light which assists during migration. The birds nest in burnt areas which is why their eggs are black and chicks look just like burnt grass tufts. These nuggets of bush knowledge truly make the experience exceptional!

Greeted by lodge staff with warm towelettes upon return to camp we were starting to feel like VIP guests with everyone seemingly turning up the hospitality charm but Phil simply explained that all guests are treated as VIP’s. The camp itself is strung out along the White Umfolozi river with eleven spacious chalets each boasting their own private deck looking out onto the river. The style can be described as contemporary bushveld chic and achieves effortless five-star style without any pretentiousness.

Meals are a stylish affair and with a slow burning fire and soft light from lanterns the outdoor dining area held an air of romance with a crescent moon suspended above us. The lodge staff are extremely attentive to guests and the three course meals more fitting of a Michelin graded city restaurant than a bush hideaway. The sounds of night birds filtering up from the river flats add a soothing quality and bed was calling after a perfect first day at mFulaWozi.

Up long before dawn, Phil arrived with the news that he had just spotted a leopard in the headlights a few hundred metres from camp. We quickly headed out to see if we could catch a glimpse but spoor was all we could find.

The morning mist was chilly and we were grateful for the blankets provided on the game vehicle. Half a kilometre from camp we came across a herd of about 120 buffalo and we stopped to observe them in the dawn haze. I noticed some movement to my right and after a few seconds clearly saw a lioness in hunting mode moving down an alley of vegetation toward the buffalo herd. I excitedly alerted the others to the sighting but the lioness had already been swallowed by the swirling mist. Phillip’s bush eyes miss nothing so I was quite chuffed that I had spotted the feline first but there was some doubt amongst the others as it had vanished before anyone else could verify it. The ensuing chaos emanating from the herd however, confirmed my conviction as the herd stampeded away from the threat. The sound of buffalo grunting and bellowing while trampling the woody thicket drowned out any morning chorus and the excitement of the hunt was palpable. Two young male lions bounded through the undergrowth and came to an abrupt halt as they saw the game vehicle and then skulked away, somewhat confused by what they had found. The hunt was unsuccessful in the end but we did manage to catch up with the young pride of two lionesses, three young male lions and three cubs. The family is known as the Mthembu pride and along with another larger pride of eighteen are the first known lions to have crossed into the new area. With an abundance of game and suitable habitat these pioneers are sure to be permanent residents at mFulaWozi. We were fortunate to observe the pride for a good hour as the young lions entertained us by pawing the water of a stream in curiosity at the small fish moving on the bottom. The cubs made their way up a steep embankment and then sat at the top of the small cliff edge, watching us down below. In that moment I wished my young daughter was with us as the scene clearly reminded one of The Lion King and would have resonated with her. Hopefully the photos would do it justice back home!

Like many lovers of the bush our favourite animal is a leopard and we tasked Phillip with finding the elusive creature, as well as a black rhino- no small feat! We headed to a remote area alongside a narrow sandy river bed where rough vehicle tracks had been recently created. The team have naturally begun identifying the individual zones with names like Sycamore Rd and Ambush alley, areas that will no doubt gain popularity in years to come. True to the task, we came across countless fresh scrapes from black rhino but the impenetrable Zululand scrub was not allowing us to find our quarry.

The reserve is a twitcher’s paradise with the varied habitats hosting nearly 400 species! The twitter from seedeaters in the undergrowth is constant with firefinches, pytilia and waxbills adding flashes of colour when flitting between thickets.

On a bend in the sand track Phil had found some very fresh leopard scat and it was obvious the beast was nearby but not wanting to be seen. He explained that in areas like Kruger, leopards have had a hundred years of being habituated to people and vehicles while this was the real untouched wilderness. This was some consolation as a wild alternative to their northern counterparts hounded daily by the Kruger paparazzi.

En route back to camp we came across the tracks of a large number of lions, most likely the 18 strong pride that had previously ventured into the area. This is further encouragement that animals are moving into the area and plans are to speed up the process by relocating numbers of giraffe, wildebeest and even cheetah from nearby reserves.

Back at camp before leaving for the bright lights we call home, I had the pleasure of chatting with the charming lodge manager, Sphamandla Shabalala. He summed up a bush getaway as a chance to reinvigorate the soul and allow for a new perspective to the normal routine of daily life, a reboot of sorts. He articulated our experience perfectly and we could relate by feeling a new strength for returning to the rigours of modern life.

Thanks to the embarrassment of riches mFulaWozi our trip will be a memorable one and until we can return again one day it will hold a special place in our hearts.

Looking for a photographer for your lodge?